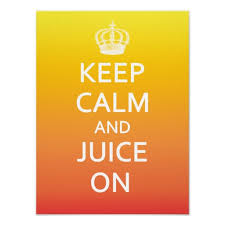 I'm done.  I set my juicing goal for May 4th, I set my weight goal for 30 pounds and I accomplished both goals.  Did you hear that?  I accomplished two goals!!!
It's been very challenging, one of the hardest thing I've ever done, but it's been so rewarding.  Now that I'm done, I'm scared.  I'm worried that I'll go back to my old habits, that I'll start eating food out of boredom, stress, or just because it's there.

I discovered a few more tips that I wish I'd learned earlier:  Mason jars are the only way to go for juicing.  Spaghetti sauce and salsa jars allow air to get in and the juice has a really bad taste after a few hours.  Mason jars keep the freshness (and nutrients) a lot longer.  Another tip:  put all your juice ingredients together in a baggie so in the morning all you have to do it grab it and shove it in the juicer.  Also, add cucumbers to everything. You don't taste them and they make your skin glow!  And one last tip, when you are talking to medical professionals refrain from telling them you are "juicing."  It makes it sound like you have a steroid problem.

This week, I've started making smoothies.  I make the juice just like normal, then blend in an avocado or a banana depending on what mixes better.  It makes the drink much heartier and fills me up!
So I will continue to juice one or two times a day. I will eat a healthy dinner with my family starting with fruit and vegetables only, then slowly add in some grains.  I think I'm going to stay away from meat.  I plan to do a juice fast every 6 months or so. That's my plan.

I'm researching the best way to go off a juicing fast and I've determined that I will start slowly with fruits and vegetables only.  It's been really tempting to reward myself with a treat, to think about all those foods that were off limits and to just jump in, but if I'm trying to break bad habits, then rewarding myself with food is not the way to go!  There is a grilled pimento cheese sandwich at Buckhead that I've been thinking about for a month and a half...but I digress.  It also is helpful to know that if I don't eat something light my stomach will probably retaliate.  Lots of people have been asking me what I'm going to eat for my first meal, and it's know it's not very sexy, but tonight I will eat an apple.  Maybe I'll go crazy and eat a Honeycrisp!

Please let me know if any of you decide you want to try juicing!  I'm a great cheerleader!

I have 16 days left!
Here's what I have discovered: 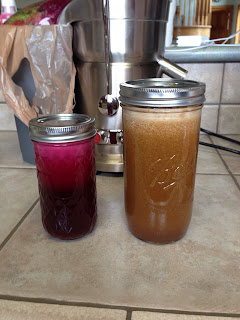 1.  I can survive without food.
2.  My hair and fingernails are growing like crazy!
3.  My tongue has a coating on it that feels gross and makes me really thirsty, which makes me drink lots of water, which is a very good thing.
4.  Beets taste and smell like dirt and there is no way around that.
5.  My very favorite juice is a Virgin Bloody Mary.  It's delicious and the Tabasco makes it seem a little heartier.
6.  Apples and carrots are too sugary to be in the same drink.
7.  I broke 3 juicers (only one of them smoked though) before I finally invested in the Breville Juice Fountain Elite.  It's fancy and sturdy!
8.  I've had two dreams about chewing food, but when you are awake and dreaming of chewing, gum is very helpful.
9.  So far, 4 of my brave friends are juicing with me!!
10.  I can't believe I'm saying this, but I'm actually sad that I'm almost done. I hate to be corny about it, but I feel better physically and emotionally than I have in years. 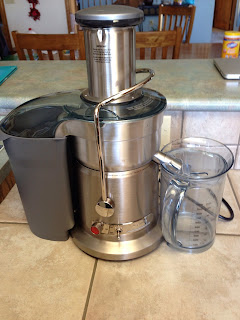 This is the strangest thing ever, especially for someone who loves to eat as much as I do, but this juicing stuff has been surprisingly easy.  OK, maybe EASY isn't the right word.  It has been doable.  I'm thinking my May 4th deadline is something I can do.  So here's the scoop:


1.  It takes some planning.  I need to be prepared for the day because it's not like I have a spare juicer everywhere I go.  I generally make enough in the morning for breakfast and to get through the day at work.

3.  I also have a decaf hot tea every day, just to get a little warm something into my body.

4.  I go through a LOT of fruit and vegetables.  A LOT!!  I read somewhere that the majority of your juice should be veggies, so I'm cramming broccoli and/or kale into every juice I make.  I wind up going to the grocery about 4 times a week, otherwise things will spoil before I can get to them.

5.  For some odd reason I have been cooking like crazy.  I must be a masochist.  I sit and stare at my family through dinner while slurping on green juice.

6.  I've gone to a few restaurants and it was sort of awkward at first, but I just bring my juice, ask for a glass of ice and leave a big tip!

8.  The weight has been falling off me.  I have lost 16 pounds and feel so awesome!

9.  Hannah loves my juice.  Except that one experimental kind.  No one liked that.

10.  I know I mentioned it before, but the first 5 days SUCK.  It seems like there are food smells everywhere and not chewing is hard.  I had an awful headache from quitting caffeine.  But then, it got so much better- so don't give up.

11.  I worried that I wouldn't be able to get enough protein, but I did some research and found that as long as I add enough leafy greens, I should be just fine. 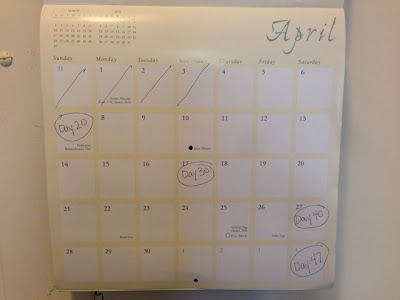 
After watching the documentary, Fat, Sick and Nearly Dead, Paul and I decided to start juicing.  And when I say "Paul and I" I really mean we decided that I would juice.  And Paul would support me.  And by support me I mean clean my juicer, sample my concoctions, get my produce and send me texts throughout the day of smiley faces and hearts, which actually is perfect because it turns out the juicer is no picnic to clean and I require lots of supportive texts. 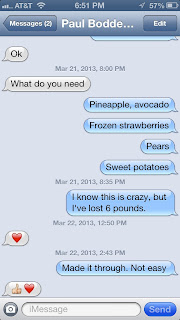 So, I went to the computer, printed some recipes and headed off to the grocery.  After spending quite a bit of money on strange things that I have never eaten (fennel! mustard greens! kale!) I came home determined to do this.  We had a juicer that my mother-in-law gave us that had yet to be used, so once I figured out how to put the thing together I was ready to go! 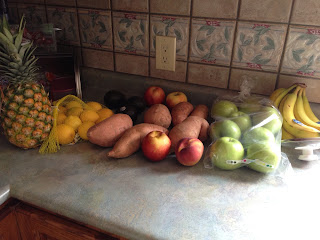 Now, according to the Reboot with Joe website, whenever I am hungry I will drink a juice.  Between 4-6 per day.  And lots of water.  And that's it.  Did you hear me?  AND THAT'S IT.  So that is what I have done.

And I have to tell you, the first 4 days were bad.  Really, really bad.  I had headaches from the lack of caffeine, I was lethargic, I was hungry, I couldn't focus, I was grumpy, and there were some *ahem* gastrointestinal issues.  The documentary had warned me that this was going to happen, so I was prepared. Even so,  I could only think of food.  All.  The.  Time.

But, then it got better.  Day 5 there was no headache, I was beginning to lose weight, I survived a party where there was cake and pizza!  I didn't feel as grumpy, and I was sort of learning to be ok with being a little hungry sometimes.  Day 5 was also the day I broke the juicer.  Smoke was coming from it and the juice I made tasted like a burnt rubber tire.  Apparently in order to juice a sweet potato you have to have a pretty heavy duty juicer and mine just didn't cut it.  So, in the role of "supporter" Paul ran out to Walmart to get a juicer of at least 800 watts.  Except they didn't have any, nor the other Walmart, nor Target.  Finally he hit the jackpot at Kohl's!  So, I'm now the proud owner of a 900 watt non-masticating juicer. 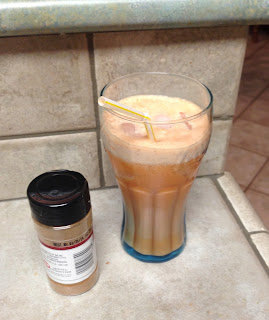 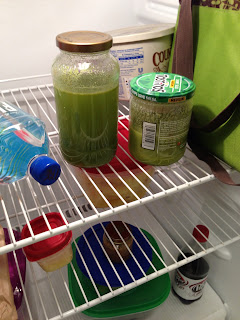 Work fridge with my juice supply!

Natalie
I'm a full time Mommy, employee and people pleaser. I was a Girl Scout until I was 18 and still get a little jacked about cookie sale season. My first concert was Donny and Marie Osmond followed shortly thereafter by Shawn Cassidy, so "cool" sort of runs through my veins. My life is a mess of juggling acts and I've never been that coordinated.

What I Write About

The Age of Miracles
by Karen Thompson Walker
Well written, haunting novel. I couldn't stop thinking about it.

Me Before You
by Jojo Moyes

The Last Runaway
by Tracy Chevalier

The Lifeboat
by Charlotte Rogan

Where We Lived While Hannah Was in the NICU!